After much delay, I finally bring to you the final installment of my epic beer birthday trip through Vermont this past October. Unfortunately, our fourth and final day was another rainy one, but we were still able to enjoy our drive through Vermont as we took an extended detour back to New York. Forgive me as I forgot to take pictures of our stops that day, and am stuck with the poor quality ones I snapped on my phone.

In case you haven’t picked up on it yet, a lot of the breweries in Vermont are hidden gems, tucked away down dirt roads, making you wonder if you’ve made a wrong turn. We picked a name off our beer passports that had yet to be checked off, and we discovered another one of these backroad treasures in Braintree, VT: Bent Hill Brewery. Pulling into someone’s country home driveway, we thought for sure we were in the wrong place, but a small brewery sign directed us to the tasting room. We were eagerly greeted by two of the brewery’s dogs, Gidget and Barley. Much to my delight, there was also a kitty tucked away inside a basket in the tasting room who could only be spotted when the tips of her ears moved. We were the only people at the bar when we arrived, probably on account of the weather, and we got to do a great tasting of everything they had on tap that day. First up was the ‘Beet Red Ale’ that was brewed with 75lbs of beets, and poured a beautiful bright ruby in the glass. I have had other beet beers in the past and found the beet flavor overpowering, but this ale highlighted the earthy beet flavor in a more pleasant, mild way. The ‘Maple Red Ale’ was also subtle, with a hint of maple sweetness against the malty backbone of this amber ale. Although we are not usually a fan of the style, the bartender convinced us to try their ‘Blood Orange Gose’, and I’m glad that he did. The traditional gose flavors of salt and coriander were present yet mild with the blood orange adding a slight tartness. My boyfriend and I were both surprised by how much we enjoyed it! Next up was my personal favorite, the ‘Chili Coconut Cinnamon Stout’. This beer tasted like a spicy samoa cookie, with the coconut and chocolate flavors being challenged by the spicy cinnamon and peppers.

The ‘Apple Cinnamon Porter’ on the other hand left me wanting more of everything: apple, cinnamon, and that roastiness I expect from a porter. The ‘Vienna Blonde’ would be a great easy drinking beer for a summer day, but like most blondes, didn’t leave a lasting impression. Finally, the ‘3030’, a tropical and juicy IPA that started bitter but finished smooth and sweet. We enjoyed this brew quite a bit and grabbed a 4-pack to go, along with some of my new favorite ‘Chili Coconut Cinnamon Stout’ or ‘spicy samoa’ as I will be calling it. I did notice that this brewery appears to be fairly well distributed in bottle shops across Vermont, so if you don’t want to trek to Braintree, it is still quite easy to seek out this brewery’s offerings.

As we headed down the state and got ready to cross back into New York, we stopped in Rutland at the brewpub Hop N’ Moose. Now, I will say that we had very low expectations for this brewery, mostly because we had never heard of it and Rutland isn’t exactly in the heart of Vermont Beer Country. We ordered a buffalo chicken pizza, and I had a flight while boyfriend had a full pour of a ‘Vienna S.M.A.S.H. Lager”. We were both pleasantly surprised! Boyfriend loved his lager, and I thought the idea of doing a S.M.A.S.H. lager was neat, as I had only seen this concept in pale ales/IPAs. For those of you don’t know, A S.M.A.S.H. beer is a Single Malt and Single Hop beer, meaning the only one kind of malt and hop are used in the whole production of the beer. These beers are a great way for getting to learn about the flavor profiles that each malt and hop bring to a beer. In the S.M.A.S.H. lager by Hop N’ Moose, Vienna malt and Hallertau hops were used, and gave the beer a distinct German lager taste. 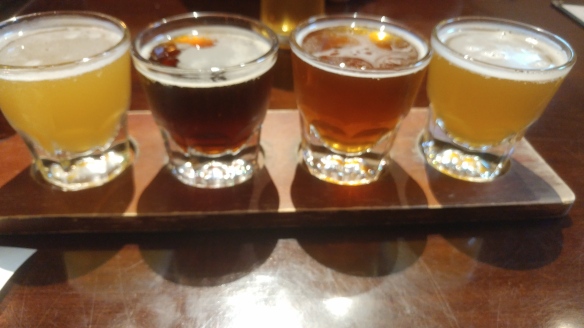 The first beer of my flight was the ‘Off White’, a Belgian Wit, and was honestly my least favorite of the bunch. While light and refreshing, this really needed more of the orange and coriander flavors promised by a Belgian Wit. Next up was their ‘Bomoseen Brown’, a brown ale brewed with honey, and was malty, sweet, and damn tasty. Their ‘Pumpkin Ale’ really stood out to me, as the flavor was overwhelmingly pumpkin, and not “pumpkin spice”. This beer wasn’t too sweet like many pumpkin beers, and I would go back again for this beer alone. Last, but not least, was the ‘Solar City IPA’, made with Citra and Simcoe hops. This juicy IPA starts bitter but finishes sweet, with a pretty strong malt presence for an IPA. Definitely a solid beer to finish out the flight. All in all, Hop N’ Moose is worth the stop for a wide variety of beers and some delish pizza.

I’m a full time nurse with a passion for craft beer and home-brewing. These are my adventures exploring breweries in the northeast, and beyond. Stay tuned as I attempt to create delicious brews in my very own kitchen as well.